How I Became a Professional Pooper-Scooper

Even as a kid I had my little money-making projects: picking wild berries in the woods in Maryland, putting on a magic show for the neighborhood, collecting pop bottles for the deposit, pet shows, lemonade stands, newspaper route; stuff like that.

I also enjoy doing things that are just a little out of the ordinary. Still, the first time I heard that someone was offering to clean up after people's dogs for a weekly fee, I just laughed. But the more I thought of it, the more sense it made. I mean, here was a job that obviously has to be done, but a lot of people prefer not to do it themselves.

So I spent the Winter of 1987-1988 studying and planning; spending time in the local libraries in the few hours I had available between the two full-time jobs I was working (making less than $6 an hour at each of them). I studied demographics and census data for my city and county. I looked up information about the pet industry. I called the county auditor and learned that there were about 100,000 dogs within 15 miles of my home.

One Hundred Thousand dogs near me! I wouldn't have to have even one percent of them in order to have enough customers to improve my life. I studied ways to scoop large quantities in the shortest time. I practiced with different tools, using "simulated dog waste" to time how long it would take to clean a yard.

I had a young and growing family to support. We were living in a tiny upstairs apartment, and I didn't even have a car. But I vividly remember walking a half mile through the snow to catch a bus for work, and saying to myself over and over, "Someday I'm not going to have to do this anymore!"

I have had ideas before; you know that feeling when you just know that something is going to work, that somebody will do it -- but I didn't have the capital to take advantage of those ideas. Now I had hold of an idea that I KNEW was going to take off, and it was not going to take much money to make it happen.

At first I had to start very slowly. In the first month of the business, I spent a total of about $150 for tools, flyers, cards, and a couple of very small classified ads. $150 doesn't seem like much money now, but at the time it was a huge risk. I couldn't afford to fail!

I got a few customers right off the bat, and made my initial investment back, plus profit, after just a couple of weeks. And that's how I got into the dog waste removal service business.

I had a lot to learn, and no money to spend. But little by little, constant improvements began to add up. Step by step, my little business was making customers happy and getting bigger and bigger. After a while I had to quit one of my regular jobs. Eventually I quit all working for regular jobs altogether.

The first vehicle I could buy to use just for business was an old Honda Civic for which I paid $300. But my customer list kept growing....

I began hiring employees when I couldn't do all the work by myself. When I had several people working for me I hired someone whom I knew could become a good manager. After a few years that person was able to take over more and more of the daily operation of the business.

The service outgrew the home-office and became an employer of 7 workers, with a fleet of 6 pickup trucks -- serving between 650 and 700 regular weekly customers. I was making more money than I had ever made before and spending most of my time with my family, traveling, reading, and doing the things I enjoy.

After ten years I felt it was time to move on to new projects and I sold my business to an excellent manager whom I know will continue to improve the business and serve the customers well.

As nice as it is to have some cash, and a deal worth nearly a quarter-million dollars, one of the greatest feelings I've ever had is to complete a project that I knew could work while just about everybody around me laughed at the idea. They must have thought I was nuts back then!

For me a great source of satisfaction is to create new realities out of ideas. To solve problems and make things happen.

If you're the kind of person who likes to make things happen rather than just take whatever comes along in life, I wish you all success.

With my most sincere best wishes,
MATTHEW

Over the years I've had so many requests for information that I finally put it all down on paper. Complete details about operations, office prodecures, actual samples of successful marketing materials, distilling my own decade of experience in starting up from almost nothing and building a successful, thriving, well-liked and PROFITABLE dog waste removal service business.

If you think you might find opportunity in filling an unmet need in your community by opening your own dog waste removal service business, you'll find my startup manual is a tool to speed your success and increase your satisfaction. 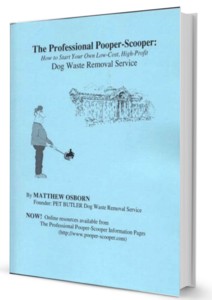 FREE BOOK. CLICK HERE.
GET IT FREE! DOWNLOAD NOW.
AVAILABLE in PDF, KINDLE, EPUB, and OTHER FORMATS at Smashwords.com.
Hey, it's FREE. No cost, no kidding.